Jekalyn Carr’s brand-new inspirational message, “I See Miracles,” is available at all digital platforms now.
The internationally acclaimed and award-winning artist/author/actress/speaker/entrepreneur released the brand new track on her 22nd birthday to radio, April 22, 2019. Now, the chart-climbing song is available for purchase, download and streaming.
Get “I See Miracles” by Jekalyn Carr
from Amazon | iTunes | Spotify
The inspiration behind the song came from the interactions Jekalyn has shared with people from around the globe as she ministered. “During my visits to different cities, so many people would come to me, asking me to agree with them in prayer for what they were believing for. They would post on my social media, too – people from all across the world were trusting God for jobs, family restoration, finances for school, houses, children, needing cars, running for government office and on and on,” says Jekalyn. “Then, it hit home as my family and I began to believe God to move some mighty mountains in our lives. In the spirit, we begin to hear: If you believe in something long and hard, if you believe in something with all your heart, it shall come to pass…I see miracles, I see miracles, I see miracles, happening for you. I quickly began to learn that this was a faith activation message – not just for me but for people to hold on and not to quit to what they were believing for, because God is surely to bring it to pass.”
The track was produced and written with Jekalyn’s father, Allen Carr. The father / daughter duo come together again to present this inspirational and faith-activating song, “I See Miracles.” As a team, they have garnered three #1 Billboard Gospel singles at radio within the last three years – “You’re Bigger,” “You Will Win,” and “It’s Yours.” The label they operate –  Lunjeal Music Group – became a 2018 Billboard Top 10 Gospel record label, along with Jekalyn being nominated for three GRAMMY Awards.
The release comes fresh on the heels of Carr’s Stellar Awards wins. The beloved young woman was awarded in the categories of Albertina Walker Female Vocalist of the Year, Traditional Female Vocalist of the Year and Traditional CD of the Year for the project One Nation Under God, and set the arena on fire during her performance of “It’s Yours.”
Recently, the celebrated Carr accomplished a rare feat. Her latest single, “It’s Yours,” held the No. 1 spot on the Billboard Gospel Airplay chart as well as the MEDIABASE Gospel chart for 9 CONSECUTIVE WEEKS!
Jekalyn will host the You Will Win Conference June 21-22, 2019 in Orlando, FL. For more information on the conference, visit www.youwillwin.org.
ABOUT JEKALYN CARR:
GRAMMY® nominated and Dove Award winning artist, Jekalyn Carr, has been soaring to success since the beginning of her career at the tender age of 15.
As an independent artist, Carr has garnered both national and international reach with two No. 1 Billboard Top Gospel Albums, The Life Project and One Nation Under God, as well three No.1 Billboard Gospel Airplay songs and two No. 1 on Gospel Digital Song chart for, “You’re Bigger” and “You Will Win.” The song “You’re Bigger” also peaked at No. 33 on the Adult R&B Radio Airplay chart.
Jekalyn’s achievements have landed her collaborations with gospel legends Shirley Caesar and Dorothy Norwood and performances on GMA’s Dove Awards, OWN’s Greenleaf, BET’s “Joyful Noise,” Black Music Honors and The Triumph Awards. In addition, she was featured in a documentary, Rejoice and Shout alongside legends such as Smokey Robinson, Andrae Crouch, and Kirk Franklin.
As compelling as she is as a vocalist, she is equally as dynamic as an evangelist. This emerging artist’s national acclaim is evinced by the distinct honor of being named Jet Magazine’s Top Ten Faces You Need to Know and Ebony’s Power 100 list.
Jekalyn’s heartfelt ministry and songs touch all genres, young and old. Her message is,

“you can be successful if you believe, pursue the vision, and most of all trust God.” 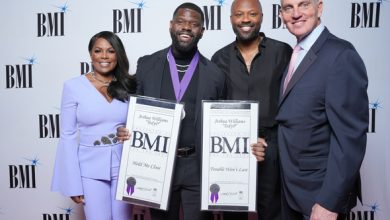