The 19-year-old supernova known as Kelontae Gavin had a huge, breakthrough year. His heartfelt Top 10 radio smash, “No Ordinary Worship,” has spent 48 weeks on the Billboard Gospel Airplay chart and has accumulated over 10 million streams. The South Carolina native earns four nods in the categories of Male Vocalist of the Year, Contemporary Male Vocalist of the Year, Contemporary CD of the Year and Praise and Worship CD of the Year for his debut album, The Higher Experience (MBE/Tyscot), which debuted at No. 1 on the Billboard Gospel Albums sales chart.

Seasoned vocalist Cheryl Fortune also had a great year with her Top 10 debut album, Simply Cheryl (LuDawn/Tyscot), which produced the empowering Top 10 anthem, “Fighters.” She currently has two urban inspirational, retro-styled singles – “Figure it Out” and “Give it Up”- circulating on both gospel and urban radio. Last but not least, singer-songwriter, Vashawn Mitchell, earned a nomination as Traditional Male Vocalist of the Year for his Top 10 EP project, Cross Music (VMan/Tyscot/ Fair Trade). 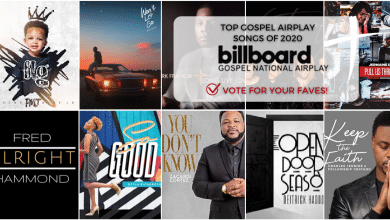