A group of enthusiastic worshipers from Tennessee and Western Kentucky frequently gather together to sing Gospel music.  Their love for music and ministry led to the group becoming a nationally recognized choir with an album release (THE GOSPEL OF TENNESSEE, 2015) and hit radio singles.  With founder and frontman Jeff Wilford, The Volunteer State Mass Choir (VSMC) continues to create and release a dynamic sound of Zion.

The latest single from VSMC is “Waiting On You”.  Written and produced by Grammy and Dove Award winning producer Tre’ Corley (Donnie McClurkin, Wess Morgan, Michael W. Smith), “Waiting On You” is continuing it’s rise up the Gospel BDS chart surpassing the Top 100 mark and swiftly approaching the Top 50 Gospel BDS radio singles.

With their new radio hit, Wilford and his choir are heating up the summer with key appearances.  VSMC will be a featured performer at the annual WLOU Radio Summerfest in Louisville, KY on June 22.  The choir will also be in Nassau, Bahamas on July 7 for the Nashville To Nassau Cultural Exchange hosted by Pastor Vincent & First Lady Donella Johnson of Community Baptist Church Ministries, Inc. (Nashville, TN).  They will return home and minister at The 2019 Level Up Gospel Experience on July 27 in Lebanon, TN.

The VSMC was formed in 2006 by musician and Christian retail store owner Jeff Wilford who wanted to bring vocalists and musicians from across the state together and to preserve the gospel choir artistry and legacy specifically in Tennessee.   You can find out more about VSMC by visiting VolunteerStateMass.com. 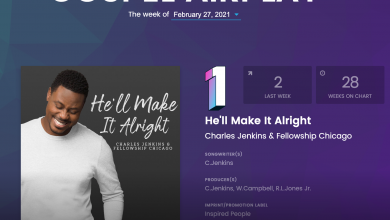