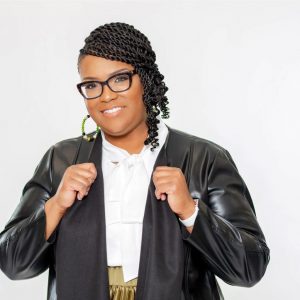 COVER US by Chrysann Moore is a simple prayer for God’s protection backed by a stirring arrangement from famed producer Rodney East. Highlighting Moore’s warm vocals and heartfelt lyrics asking for “angels to surround us.”

I am from Lockport, IL. It is a city about 30 miles Southwest of Chicago. I have lived in Lockport all of my life.

The inspiration for “Cover Us” came during a difficult and trying time, I believe, for all of us last year. We were dealing with problems and situations in our lives already; but to then have the pandemic , the killing of our African -American men by police, and civil unrest added to it? That was a lot to handle! There were times when I felt the spirt of fear and worry try to shake my faith and trust in God. I asked the Lord to give me something to say that would bring comfort and peace to His people during this, again, difficult time. He answered by reminding me of Psalm 91. From that scripture I was able to write “Cover Us.” It is a simple prayer to God asking for His divine protection! Even in the midst of all that is going on around us, “there’s a secret place where we can dwell and abide under the shadow of the Almighty.” He has the ability to “Cover Us.”

Without a doubt Elbernita “Twinkie” Clark is an artist that has influenced my career tremendously. As a young girl growing up and learning how to play the organ, I was amazed the first time I saw Twinkie Clark live at a concert in Joliet, IL. She was singing and playing that organ!!! I was blown away. I was empowered by what I saw. I said to myself, “If she can do it, I can do it too.” She is an awesome songwriter, singer, and musician. I would love for my music to have the level of influence that her music yet has today. It would be a dream come true if I could one day sing a song or write a song with Twinkie Clark. She is truly a gift to the body of Christ.

I think one thing that sets me apart from other artists is the aggressive and passionate way in which I minister, especially when I’m on the organ. Most people don’t expect me to be that way because I am a very reserved person, unless I’m praising God! LOL! What makes my artistry unique? I believe I am a versatile singer. I can be vocally and musically creative whether I’m singing a hymn, congregational song, contemporary gospel song, or a praise and worship song.

The single “Cover Us” is actually the title track off of my debut solo album that was released in January of this year. The album has 9 tracks. All of the songs were written by me except a song called “We Praise You” that was written by my producer Maurice Fears, Sr. “Cover Us” was produced by Rodney East from Chicago, IL. He is one of the greatest musicians and producers anywhere. He did the music and vocal production for “Cover Us”. My album has a little bit of everything on it. Praise and worship, quarter, traditional, and contemporary gospel as well. I am so grateful that God blessed me to finally release this music. The MD for this album was Arreiun Tucker who also played keys and aux. The band consisted of Curtis Lindsey (Organ), Thaddeus Johnson (Bass), Darryl Howell (Drums). They helped bring my songs to life along with the awesome background singers!

My favorite verse is Psalm 37:4. Delight thyself also in the Lord; and He shall give thee the desires of thine heart. As I began to really take pleasure in the things of the Lord, the desires that I had began to change. My desires began to become desires that were a part of His divine plan for my life. God is amazing! We often go after the things we desire instead of going after God FIRST! If we do it the way He tells us to, we will see His word come to pass in our lives. He has truly given me the desires of my heart and I know He’s not done yet cause I still have many desires yet to be fulfilled.

Many people have expressed how they have been blessed by the songs off of the album. I am humbled and encouraged to know that someone in some way is being blessed by the music that God has allowed me to release. I believe that this was the right season for this music to be heard. The title track “Cover Us” is picking up momentum and finding its way to more radio stations. Several doors have opened for me to minister because of the song. My desire is simply to encourage the body of Christ anyway I can and music is one of the avenues that God has given me to do so.

“Be Patient” by Joanna Hale-McGill

“Born To Die (A Song For Christmas)” by Angela Moss Poole

“Be Patient” by Joanna Hale-McGill

“Born To Die (A Song For Christmas)” by Angela Moss Poole

Pastor Mike, Jr. hits Billboard Gospel Airplay No. 1 again with "I Got It"