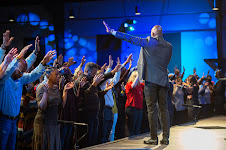 The opening track, “New Waves,” is a smooth track spoken by the  Fredericksburg, Virginia church’s pastor, Jeffrey Smith. His warm, resonant tone commands the listener’s attention with the same authority of actors such as James Earl Jones or Morgan Freeman. It segues into the up-tempo song “Waves” that is led by Maurette Brown Clark, who is best-known for her Billboard No. 1 hits such as, “It Ain’t Over (Until God Says It’s Over)”, and “One God”.  The live session is built around a rhythm section, horns, and a bright-voiced team of background singers.

There’s a balance of moods on this collection. “Big” and “Stronger” shine with high-energy bass lines and contemporary rhythms.  There are from-the-heart ballads such as “With One Sound,” “Thanks Be to God,” “Lord, Fill Us Again,” and “I’m Thankful.” Davis joins Tonya Kenon on a  Jazzy track, “More Than Enough,” that features acclaimed saxophonist, Merlon Divine.

“Law of Breakthrough” is a sweeping, anthem-styled song that encourages the listener to triumph over obstacles. Leon Timbo’s soulful, earthy voice inhabits the acoustic track , “The Promise,” with depth of passion. Latin Christian artist, Freddy Rodriguez, shares his expressive tenor on the feel-good, up-lifting,  “Empowered 2 Impact,” that bursts with the energy of a South American carnival. The album concludes with the vibrant, R&B-flavored call to worship, “In the River,” that features the joyous vocals of Davis and his wife,  Jennifer Davis. The album is now available at all major digital music stores.