(Nashville, TN) – October 25, 2021 – The 52nd Annual GMA Dove Awards were announced during an exclusive broadcast on TBN, Friday, October 22nd. Held in Nashville, Tennessee, the show, under the banner Stronger Together, aims to honor the premiere Christian and Gospel music artists.
TRIBL Records’ own Maverick City Music, took home awards for Worship Album of the Year and New Artist of the Year. The award-winning collective also performed their #1 hit, “Jireh” on the annual ceremony.
To watch the 52nd Dove Awards on demand on the TBN app.
“Our prayer is that every time we go out, that we don’t magnify us, that we don’t magnify celebrity or our personality or our fashion or anything. We wanna lift up Jesus,” shared Naomi Raine of Maverick City Music, when receiving the award for New Artist of the Year.
Maverick City Music was launched in 2018, after hosting seventeen songwriting camps which brought together over one hundred Christian artists and songwriters and the result being the creation of over one hundred songs. Maverick City Music released their first extended play, Maverick City, Vol. 1, on July 29, 2019. In 2020, Maverick City Music released their debut album, Maverick City Vol. 3 Part 1- the album debuted at number six on Top Christian Albums and number two on Top Gospel Albums Chart.
Maverick City Music made extraordinary headlines with their release Old Church Basement, a collab album with Elevation Worship, which broke streaming records at both Apple Music and Spotify. On Apple Music, the group set a new worldwide record for the most first-day streams for a Christian and Gospel album, and on Spotify, the album broke the U.S. record for the most streams in a day for an album by a Christian group and was #4 out of all U.S. albums its first weekend of release. Old Church Basement features vocals from celebrated singers: Chandler Moore, Brandon Lake, Naomi Raine, Chris Brown, Dante Bowe, Tiffany Hudson, Joe L Barnes, and Amanda Lindsey Cook.
Currently, Maverick City Music is selling out arenas domestically on their very first headlining tour, Welcome to Maverick City. For more information on Maverick City Music visit MaverickCityMusic.com, on Instagram at @MavericyCityMusic and Facebook at Facebook.com/MaverickCityMusic.
To get the full 52nd Dove Awards show audio broadcast including exclusive backstage interviews with winners, performers and presenters from SiriusXM The Message only. 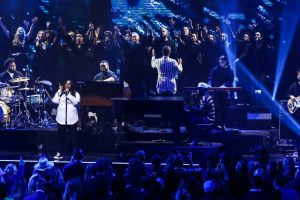 About Gospel Music Association & Foundation:
Founded in 1964, the Gospel Music Association serves as the face and voice for the Gospel/Christian music community and is dedicated to exposing, promoting, and celebrating the Gospel through music of all styles. In addition to ongoing education, advocacy and networking efforts the GMA also produces a variety of programs designed to expose music to new audiences through TV and online broadcast specials like the annual GMA Dove Awards and Because He Lives: An Easter Celebration. For more information on the GMA, visit www.gospelmusic.org and follow @gmadoveawards on Facebook, Twitter, and @gospelmusicassoc on Instagram.
About TBN:
TBN is the world’s most watched faith-and-family broadcasting network, reaching over 175 nations with inspirational programming in 14 languages and on 32 global networks. TBN, the original pioneer of faith-based television, is expanding into other marketplaces such as publishing and innovative digital content in various formats, all designed to reach every viewer demographic with the life-changing message of hope and grace. To find out more about the TBN Networks, visit us at tbn.org.
Tags
2021 GMA Dove Awards 52nd Annual GMA Dove Awards Maverick City Music TRIBL Records
Black Gospel Radio Follow on Twitter Send an email October 25, 2021
0 274 2 minutes read
Share
Facebook Twitter LinkedIn Pinterest WhatsApp Telegram Share via Email
Show More
Share
Facebook Twitter LinkedIn Telegram Share via Email